The Bollywood Songs on Letters/Chitthi 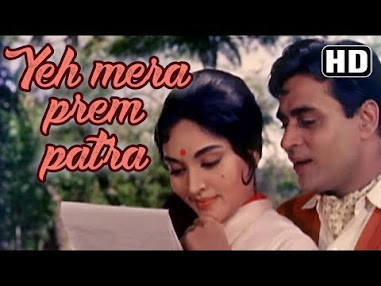 Writing a letter used to be an art. In the present age of SMS and email, this art of writing letters is almost lost. There was a time when a diary writing or letter writing was the best way of expressing your emotions or feelings but this is being done with Emojis or tweets
Many great leaders wrote letters, these letters are still being preserved. Many great books were published having the collection of these letters, recall the book on Nehru’s letters to his daughter
Letters have played an important part in several of our films, in many films, a letter found in the end changes the climax, the letters were intercepted by villains and replaced by a fake letter for some devious purpose. Similarly, letters remain a part of many of our film songs. Many hit songs were based on this theme.
The first immortal song in my list is from 1947 film Dard, picturized on Munawar Sultana. This song was written by Shakeel Badayuni, composed by Naushad and sung by Uma Devi who was known as Tun Tun.  It was a big musical hit which catapulted Naushad to great heights.
Song of Dard 1947
Here is a song from a movie called “Ardhangini ” (1959).This song featuring Meena Kumari is a happy enough song. It is sung by Lata. Written by Majrooh Sultanpuri and composed by Vasant Desai.
Song of“Ardhangini ” (1959)
The next immortal song is from Sangam(1964), written by Hasrat Jaipuri, composed by Shankar Jaikoshan, picturized on Rajendra Kumar
Song of Sangam 1964
Here is a song from Haqeeqat(1964) written by Kaifi Azmi and composed by Madan Mohan sung by Mohammad Rafi and others
Song of Haqeeqat 1964
The song is sung by Asha Bhosle, written by Anand Bakshi and music is given by Laxmikant-Pyarelal, It is a dance song picturized on Asha Parekh
Song of Aaye Din Bahar Ke 1966

This melodious superhit song is written by Neeraj, composed by Shankar Jaikishan and is sung by Mohammed Rafi from 1968 film Kanyadan It features Shashi Kapoor and Asha Parekh.
Song of  Kanyadan 1968
This song from the movie Saraswatichandra (1968) is sung by Lata Mangeshkar and Mukesh and is picturized on Nutan and Manish.
Song of Saraswatichandra (1968)
This superhit song from Prem Pujari (1970) was written by Neeraj, composed by S D Burman and sung by Kishore Kumar. picturized on Dev Anand
Song of Prem Pujari 1970
This is a duet of Kishore Kumar and Lata Mangeshkar from Rampur Ka Laxman 1972, picturized on Randhir Kapoor and Rekha.
Song of Rampur Ka Laxman 1972
Quite a moving song, sung so beautifully by Kishore Kumar. Written by Gulzar and composed by Laxmikant Pyarelal for Palkon Ki Chhaon Mein.In this song, a bicycle riding postman carries posts in a village. The song describes the feelings of those who eagerly look forward to the postman
Song of  Palkon Ki Chhaon Mein. 1977
This beautiful Ghazal of Pankaj Udhas from 1986 film Naam. picturized on him , perhaps one of the best Ghazals of him.
Song of Naam 1986
This song is sung by Sonu Nigam & Roop Kumar Rathod from 1997 film Border is about the letters sent to the soldiers by their near and dear ones.
Song of Border 1997
It is really surprising to see a song recently in Bareilly Ki Barfi (2017) where letters become the mode of communication for the reclusive writer played by Ayushmann Khurrana, and his fan, played by Kriti Sanon. The song was sung by Anshuman Khurana .