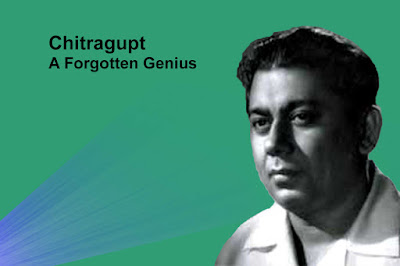 Chitragupt (16 November 1917 – 14 January 1991) the forgotten music director of the Golden Era, gave us some of the most memorable songs. "Laagi Chhoote Na" sung by Mohammed Rafi & Lata Mangeshkar is one of these songs. He became a household name after the 1962 release of Main Chup Rahungi starring Meena Kumari and Sunil Dutt.

He was a very learned man, was a postgraduate in two subjects,  a master’s degree in Economics, following it up with an MA in Journalism. He was a professor in Patna University for some time. He also had a love for music besides academics. He had a good grounding in classical music, he used to play the Tabla and had good singing skills. He had  a secret desire of becoming a professional singer which was known to his friend only.

One day his friend Madan Sinha (who later became a well-known cinematographer and also directed the Vinod Khanna-starrer Imtihaan in 1974) suggested they go to Bombay to try their luck in the films, Chitragupta agreed.

When they arrived in Bombay, Chitragupt managed an introduction to the legendary Nitin Bose who gave him a chance to sing in the chorus. One thing led to another and Chitragupta soon found himself as the assistant of composer S NTripathi.

He got his break as an independent Music director with Fighting Hero (1946). After that he gave music in many B grade movies but his first hit song was a duet by Shamshad Begum and Mohammad Rafi in Sindbad The Sailor (1952).

His first big banner was AVM Shiv Bhakta (1955), AVM’s backing also meant the music director finally got Lata Mangeshkar to sing for him. This was the beginning of a long and fruitful association for both.

Lata Mangeshkar sang “240 songs (no fewer than 151 solos)” under Chitragupta’s baton. Recall the songs of Mein Chup Rahongi(1962) and Bhabhi (1957). In fact, it was AVM films that made him popular as a composer.

The lyricist Prem Dhawan, a frequent collaborator, was also a dear friend. “They would often drive off to Aarey Colony where they would find a place to sit down and that’s where they would make the songs.”

Chitragupta died on January 14, 1991, The music director duo Anand-Milind are his 2 sons, who gave the music of Qayamat Se Qayamat Tak,