Celeberating Karwa Chauth with these Songs 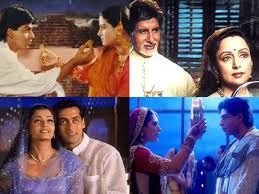 Karwa Chauth has a ritual where the wife holds a fast to pray for the health and long life of her husband. The fast is only broken after she sees the moon, followed by the husband feeding her some food. This festival This one-day festival is celebrated in the Northern part of India but Thanks to the Bollywood, Karwa Chauth isn't limited to be a North Indian or Punjabi festival anymore. It is now glamorized and widely popular function in India.

Many songs and scenes were created in Bollywood to attract audiences. The first time a song on Karwa Chauth was created in 1965 film Bahu Beti.Another old song I remember Aaj Hai Karwa Chauth Ka Vrat from the film Karwa Chauth released in 1978. The trend started in the 1990s with the movie Hum Dil De Chuke Sanam,1992, Hum Apke Hain Kaun 1994, later it was Punjabitised by Yash Chopra from DDLJ.

The fast is traditionally celebrated in the states of Rajasthan, parts of Uttar Pradesh, Himachal Pradesh, Haryana, and Punjab.Every state has his own style of celebrating this fast but in films only Punjabi style is shown.In 1994 film Chand Ka Tukda a song was picturised in Gujarati style.Here are some of the best Karwa Chauth songs from some of our favourite Hindi movies.