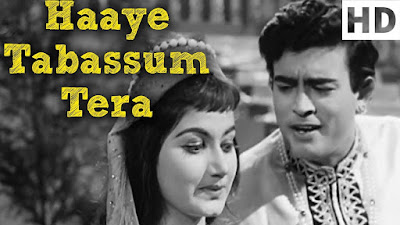 This was the first song picturized on Sanjeev Kumar on his first film as a hero in Nishaan released in 1965. The song was sung by Mohammad Rafi and composed by Usha Khanna. The film went unnoticed but this song became popular.

He made his film debut with a small role in Hum Hindustani in 1960. His first film as a protagonist was in Nishan (1965). In 1968, he acted alongside the famous actor of that time, Dilip Kumar, in Sangharsh. Dilip Kumar was very much impressed with his acting. He appeared in the 1968 film Shikar, he got the Filmfare Award for Best Supporting Actor  He was praised for the 1970 film.Khilona(.

He started accepting the roles of an old man at every young age, recall him in  Arjun Pandit, Sholay and Trishul,. His portrayal of the character Thakur, from Sholay, released in August 1975, was one of his stellar performances. In Naya Din Nayi Raat (1974), Sanjeev Kumar reprised the nine-role  He also proved his ability to do comedy in films such as Manchali, Pati Patni Aur Woh, Angoor, Biwi-O-Biwi and Hero. His double role in the film Angoor was listed among the 25 best acting performances of Indian cinema