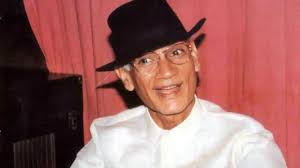 His songs had a unique freshness, a rare robust beat, a flowing style similar to what you feel when you dip your hand in a running stream, blending Punjabi folk music with a rare Western-style orchestration, never heard before or since. His variety of rhythm patterns baffles the film industry, even today.

O. P. Nayyar (16 January 1926 – 28 January 2007  ) started his career as a movie music composer by composing the background score for the movies, Kaneez (1949) and made debut as an independent composer from Aasmaan (1952). He became famous with the music of Aar Paar released in 1954 and CID released in 1956. All the songs of CID were super hit especially "Leke Pehla Pehla Pyar" and "Aye Dil Hai Mushkil Jeena Yahaan"

A major blow was Nayyar's split with Asha Bhosle after the pair had reached a crescendo with the Filmfare Award  winning Chein se humko kabhie in Pran Jaaye Par Vachan Na Jaaye (1974). Nayyar tried recreating the magic with new singers but musical trends had bypassed him by then He worked till the 1990s but his music was not appealing to the young generation.On the later stage of his life, he was living with his friend. He left his family members even asked none of his family to be present on his funeral. He died on 28 January 2007.