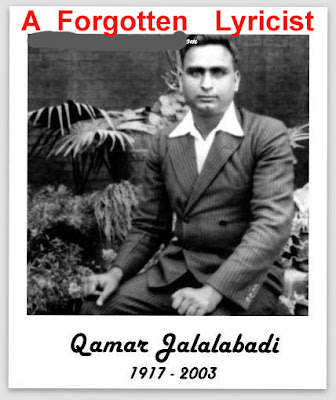 Qamar Jalalabadi (9 March 1917 – 9 January 2003), a poet who wrote more than 700 songs in more than 150 films gave us many immortal songs. One of his songs became the Radio Ceylon's anthem on the first of every month for decades, "khush hai zamana aaj pehli tarikh hai".

Right from the age of seven, he started writing poetry in Urdu. There was no encouragement from home, but a wandering poet named Amar Chand Amar met him in his hometown and encouraged him to write, recognising his immense talent and potential.

To try his luck he came to Pune in the early 1940s. In 1942, he wrote lyrics for his first film Zamindar, the song  "Duniya me garibonko aaraam nahi milta" sung by Shamshad Begum became popular. Besides writing songs he also wrote dialogues and script for films. In 1944 he wrote dialogues and songs for 1944 film 'Ramshastri' and 'Chand'.  The noted dancer Sitara Devi performed some of his songs in Chand (1944). Chand was one of the earliest of Qamarji's successful and memorable films.He worked with S D Burman in 1946 in the film “Eight Days” where the comic song “O Babu Babu Re” became quite popular. He went on to work with music director Sardar Malik on many films.

Here are a few of his memorable songs