Shakti Samanta- The Maker of a Classic 'Amar Prem' 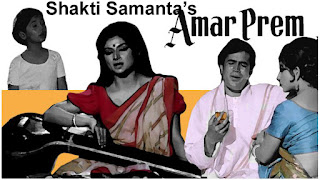 Amar Prem was his 3rd film with Rajesh Khanna. Initially, Rajkumar was the original choice to play the lead hero.  When  Rajesh Khanna heard it he went to Shakti Samantha's office and asked him how can he cast another actor in this film, this was because they had already given a classic hit like Aradhana 1969 and Kati Patang 1970 was almost ready for release and they both had bonded a good relationship between them.

Another interesting fact of this film is that the immortal song 'Chingari Koi Bhadke' was not shot on the Hooghly river with the Howrah Bridge on the background was shot in a studio in Mumbai. Shakti Samanta in an interview said that the entire film was shot in Bombay and its suburbs, in fact, he told that a great length of shooting happened in a village at Nala Supara, the suburb of Bombay. The song was an additional song, it was added in the film when the film was complete.

The film's story is based on a Bengali short story Nishi Padma by Bibhutibhushan Bandopadhyay. , A Bengali film with the same name got released in 1970 starring Uttam Kumar and Sabitri Chatterjee.  Bengali writer-director Arvinda Mukherjee wasn't familiar with Hindi so he wrote the script of Amar Prem 1972 in English, writer Ramesh Pant then translated the whole script in Hindi.

Rajesh Khanna reportedly saw Nishipadma 24 times. He suggested changing the character's name from Ananta to Anand to draw a connection to his character in Hrishikesh Mukherjee's critically acclaimed Anand (1971).

One of the highlights of this film was its music composed by R D Burman, the soundtrack was melody-based, which gave Lata Mangeshkar her finest classical solo of the decade, Raina Beti Jaaye, set in an unusual blend of two Ragas, he had heard his father, music composer S. D. Burman sing, Bela Boye Jaye, which he said was on his mind while composing the song. Bakshi's lyrics, created a Meera bhajan-like idiom for the song, employing the Krishna-Radha motif.

Another memorable song 'Yeh Kya Hua Kaise Hua' by Kishore Kumar was a true copy of the Bengali version of Kishore from the film 'Rajkumari' This song was too composed by R D Burman earlier. Another song  "Bada Natkhat hai Re Krishna Kanhaiyya" sung by Lata Mangeshkar is another masterpiece from Burmans.It happened when Sachin Da heard the tune of this song, he asked Pancham  to redo the tune as per the situation of the song.Thus R.D. Burman made a tune in Raga Khamaj, which Lata Mangeshkar too sang with marked emotional clarity.

Rajesh Khanna's dialogue "Pushpa, I hate tears", which appeared five times in the film has become the most popular dialogue of Rajesh Khanna. He was nominated as the Best Actor for this film but couldn't get.Anand Bakshi, the lyricist and Kishore Kumar were also nominated for their respective fields.

Though 1972 was a year of the big films Pakeezah, Dushman and Beimaan, Amar Prem was eighth amongst Khanna's top releases in the year.The film became a classic and became the most memorable film of Shakti Samanta, R D Burman,Sharmila Tagore and Rajesh Khanna.