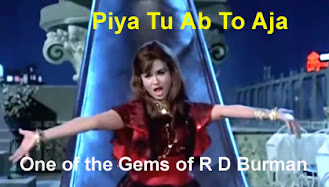 Music and Song sequences can make a film hit and memorable. This song from the 1971 film from Caravan is one such example. This song was written by Mazrooh Sultanpuri, composed by R D Burman and sung by Asha Bhonsle. The song was performed by Helen, who is known for doing item numbers in Bollywood .

Music scholar Nilanjana Bhattacharjya identified "Piya Tu Ab To Aja" as one of the culturally important Hindi film songs. The song has also been called "the catalyst" that made "Asha  Bhonsle the queen of cabaret numbers". R D Burman was nominated for the Filmfare Best Music Director and Asha Bhonsle was awarded the Best Female Playback Singer for this song.

The picturisation of this song is typical of the item numbers of the era portraying a "vamp" character who dances seductively for a nightclub audience. The audience used to get crazy when this dance number starts. I was a teenager when this film was released was also mesmerized with this song and dance number. Almost 50 years have passed, this song still makes people dance.

In Aug 2020, A video of two elderly women dancing to the tunes of Asha Bhosle’s hit 1971 song Piya Tu Ab Toh Aaja, from the film Caravan, has gone viral on social media. The saree-clad women launched a dance party in the middle of a street. Watch this viral video here.

Two elderly women dancing
This song boosted the career of Asha Bhonsle, getting the maximum number of cabaret or item songs. This song also stamped the 'Jodi' of R D Burman and Asha Bhosle. They gave us many peppy and immortal songs after this.
Asha Bhosle recorded a new version in 2003 for the Kronos Quartet album You've Stolen My Heart: Songs from R.D. Burman's Bollywood.  It also appears on the compilation album The Very Best of Asha Bhosle, The Queen of Bollywood. Composer Lesle Lewis released a remix of the song on his 2003 album Special Appointment Club Hits. This number is also referenced briefly during the song "Dhoom Tanaa" from Om Shanti Om when Deepika Padukone, dressed in a gold bikini ensemble, dances in a cage.
Song of Caravan 1971