KHEM CHAND PRAKASH - The creator of musical gems, and the mentor of stalwarts 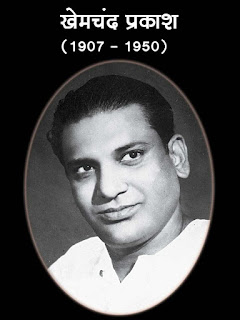 Very few of us know that greats like Lata Mangeshkar, Kishore Kumar, Naushad, Manna Dey and Bulo C Rani were mentored by him. But the creator of these musical gems and the mentor of this league of stalwarts is now largely forgotten. On his Death Anniversary, I pay my tribute to this great composer who composed the song Aayega Aane Wala Aayega sung by Lata Mangeshkar.
Khemchand Prakash was born in Jaipur in 1907 where his father Goverdhan Das was a Dhrupad singer & Kathak dancer in the royal court of Madho Singh II, and the boy, Khemchand got his first training in music & dance from his father. Soon he became popular for his Kathak dancing talent and for his unmatched skills in drawing animal sketches with gulaal on the floor using his feet while dancing!
He joined New Theaters as an assistant of Timir Baran, the music director of Devdas (1935) two of the classic compositions from Devdas, ‘Dukh ke din ab...’ and ‘Baalam aan baso...’ , were composed by him as an assistant Music Director.
Initial few years were not good for Khemchand Prakash, it was in 1943 that came a film which pushed Khemchand Prakash much ahead of the other music directors of the era and the film was KL Saigal starrer Tansen, considered one of the finest musicals. Diya jalaao jagmag jagmag, Rumjhum rumjhum chal tihari, More balpan ke saathi, Sapt suran teen gram... are musical gems.

Legendary Music Director Naushad was his assistant in many films, in an interview, Naushad said it was Khemchan Prakash who made him assistant from the film Gaazi Salauddin, after that he was assistant to him for many films. He learnt from him a lot He was his real Guru.
We all know that Ghulam Haider was the mentor of Lata Mangeshkar. He introduced Mangeshkar to producer Sashadhar Mukherjee, who was working then on the movie Shaheed (1948), but Mukherjee dismissed Mangeshkar's voice as "too thin".Her voice was also rejected by producer Chandu Lal Shah, owner of Ranjit Movietone and Khemchand Prakash, music director with the studio, challenged his decision and told him that Lata’s voice will rule the nation one day and resigned from the studio. Khemchand’s first film with Bombay Talkies studio, Ziddi, also featured a beautiful song by Lata Mangeshkar, ‘Chanda re, ja re ja re...’.

But what followed Ziddi was an outstanding piece of work in the form of the music of Mahal (1949).

Mahal made Lata Mangeshkar a popular name in every corner of the country. The haunting melodies and brilliant orchestration of Mahal, set the foundation for the golden period of Hindi film music of the 50s.
Song of Mahal 1949
1948 marked yet another significant film in Khemchand’s career - Bombay Talkies’s Ziddi, in which he gave Kishore Kumar his first major break as a singer with the song ‘Marne ki duaaen kyun maangu...’
Song of Ziddi 1948

Unfortunately, Khemchand Prakash did not survive long enough to see the success of Mahal or the shaping of the golden era of the Hindi film music of the 50s. He passed away on Aug 10 1950