The Great Bollywood Songs based on Folk Music 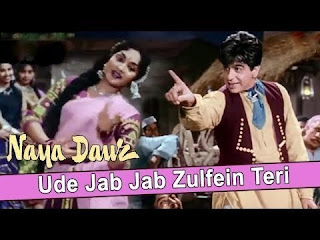 India is a diverse country, Every region, every state has its own music. From the rural part of these areas originated the music which had been one of the indispensable sources of music for Bollywood. The leading composers of Bollywood films had used the folk songs in successful films and popularized them.
The first Marwari song in Hindi film was taken in early talkie era – ‘Baala Joban’ from 1934.
S D Burman was one of the composers of Golden Era who created many great songs based on Folk Music.The major folk songs used by SD Burman in bollywood films include “jane kya tune kaha” sung by Geeta Dutt in Pyasa, “dil ka bhanwar kare pukar” sung by Rafi in the film Tere Ghar Ke Samne, “o janewale ho sake to”, sung by Mukesh in the film Bandini, “mitwa” sung by Talat Mehmood, in the film Devdas. In this Blog, I have selected such songs based on Folk by various Music Directors.

Allah Megh De Paani De
This song “Allah Megh De paani de” is based on a East Bengal folk song. This song is sung by S D Burman and the song plays in the background in the movie.
Shailendra is the lyricist. Music is composed by S D Burman.
Song of Guide 1965