The Films of Meena Kumari and Dev Anand 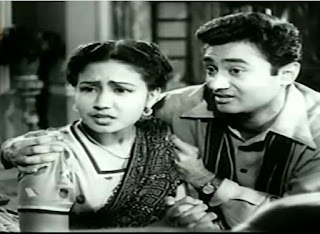 Meena Kumari and Dev Anand worked together in 4 films and all of them were successful. the first film they worked together was 1951 film Sanam. In that film, she was not the heroine but the heroine sister. The heroine was Suraiya. After that, she came as Dev's heroine in Tamasha in 1952. In fact, this was the first film signed by Meena Kumari with Dev Anand but Sanam released earlier.
Tamasha was directed by Phani Mazumdar, starring Meena Kumari, Dev Anand and Ashok Kumar in lead roles. One of the big hits of the year from Bombay Talkies produced by Ashok Kumar and Sarak Vacha,
BaadBaan was the next film of Meena Kumari with Dev Anand with the earlier star cast, film directed by Phani Majumdar and produced by the Bombay Talkies Workers' Industrial Cooperative Society Limited. The film stars Dev Anand, Meena Kumari, Ashok Kumar and Usha Kiran in lead roles. The music score was composed by Timir Baran and S.K. Pal.
Kinare Kinare was a 1963  film directed by Chetan Anand, who also plays a pivotal role. The film featured Dev Anand and Meena Kumari in the lead roles. A great music by Jaidev.