Most Memorable Films of Vyjayantimala 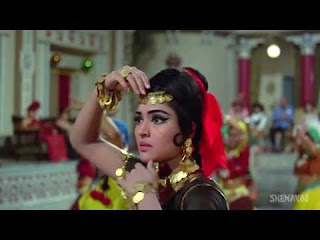 Born on August 13, 1933, she was a natural performer who danced for the pope at the age of four. She started in films under MV Raman’s direction at AVM with Vazhkai/Jeevitham (1949), a bilingual film in Tamil and Telugu. The immensely popular film was later adapted as Bahar (1951)
She was the first South Indian actress who made it as a national star and was one of the biggest ever Hindi Film female stars in a career lasting almost two decades. She was the first heroine refusing to take Filmfare Award as Best Supporting Actress for Devdas 1955
Nagin 1954 It stars Vyjayanthimala and Pradeep Kumar, and has a hit musical score by Hemant Kumar. The film got favourable responses from the audience and became the highest-grossing movie of 1954 where it was labelled as a blockbuster.In the title role, she puts over a commendable performance besides looking ravishingly beautiful as the belle of the hills. Her dancing, too, is very graceful, especially in those eye-filling colour sequences and delightful ballets towards the finish.Hemant Kumar's music and her dance on the song, "Man Dole, Mera tan dole", rendered by Lata Mangeshkar was one of the highlights of the film.

Devdas 1955- Bimal Roy cast her as Chandramukhi opposite Dilip Kumar in the critically acclaimed Devdas, which was the adaptation of the novel with the same title by Sharat Chandra Chatterji. The industry initially was not in favour of this choice when they heard about Vyjayanthimala being cast in Bimal Roy's film, For Vyjayantimala, the character marked a turning point from glamour to pure histrionics, offering her scope to explore her potential as a dramatic actress

Naya Daur 1957 had a theme of "Man vs. machine", and Vyjanthi's portrayal of a village belle.For this film, Dilip Kumar won the Filmfare Award for Best Actor for the third time in a row, being his fourth overall. The film was a big hit

Madhumati 1958  film directed and produced by Bimal Roy, and written by Ritwik Ghatak and Rajinder Singh Bedi. The film stars Dilip Kumar and Vyjayantimala in the lead roles, with Pran and Johnny Walker in supporting roles. The plot focuses on Anand, a modern man who falls in love with a tribal woman named Madhumati. They are unable to have a relationship during their lifetimes and are reincarnated.The soundtrack of Madhumati became the best-selling Bollywood soundtrack of 1958.[21] Salil Chowdhury won his first Filmfare Award for Best Music Director. Suhana safar aur yeh mausam haseen is one of the most popular songs

Sadhna 1958 -the film produced and directed by B. R. Chopra. The film stars Vyjayanthimala and Sunil Dutt in the lead with Leela Chitnis, Radhakrishan, Manmohan Krishna, Uma Dutt and Ravikant, forming an ensemble cast. The story, screenplay and dialogue were penned by Mukhram Sharma. The film revolves around Rajini (Vyjayanthimala), a prostitute, and her love affair with a professor She got the Filmfare Award for best Heroine.

Sangam 1964 directed by Raj Kapoor, written by Inder Raj Anand, and produced by Kapoor with Mehboob Studio and Filmistan. The film stars Vyjayanthimala, Raj Kapoor and Rajendra Kumar in the lead roles.It became a hit in India and is considered a classic today. One of the features of the film that became widely used later on in Bollywood is the use of foreign locales for on-location shooting, such as Venice, Paris, and Switzerland. She got the Best Heroine Filmfare Award.

Amrapali 1966  directed by Lekh Tandon, starring Vyjayanthimala and Sunil Dutt as leads. Music of the film was by Shankar-Jaikishan. It was based on the life of Amrapali (Ambapali), the nagarvadhu (royal courtesan) of Vaishali in present-day Bihar, fully Indian classical music-based score in the four songs,