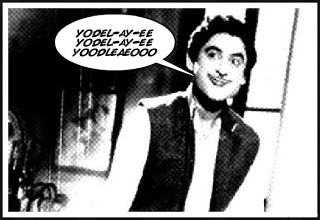 Yodeling is a form of singing which involves repeated and rapid changes of pitch between the low-pitch chest register (or "chest voice") and the high-pitch head register. It originated in Europe, especially in central Europe. In the movies, it was Jimmie Rodgers who popularised Yodeling. 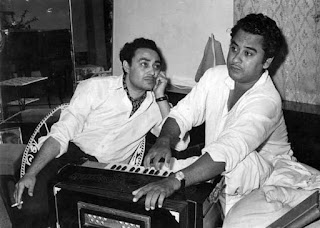 In India, it was Kishore Kumar who introduced yodelling in Hindi Films.  Here’s a story: his brother Anoop went to Austria and bought some records with yodels there. One day when Anoop went home, he heard yodelling in the house and thought somebody was playing his records… but it was Kishore who had learned how to do it. The first time Kishore Kumar tried Yodeling in the song was in 1950 film Muqaddar, It was a duet, the first duet of Kishore with Asha Bhosle. The second time Kishore tried with Meena Kapoor for the song " ye sama hum tum jawaan,pehloo se dil sarak jaaye.." from the film  Mashooqa,1953, The next yodelling song was"Tikdambazi" from the 1954 film Adhikar. Piya Piya Piya Mera Jiya Pukare from 1955 released film Baap Re Baap.was a hit so after that many music directors tried Yodeling in their compositions. The next hit song of Kishore was "Nakhrewali Nakhrewali" from the 1956 film New Delhi.
Kishor Kumar's film Chalti Ka Naam Gaadi (1958) had many songs where S D Burman used his yodelling.
On his 89th Birth Anniversary, I decided to bring for you a compilation of his best yodelling in songs like Zindagi Ek Safar Hai Suhana (Andaz, 1971), Bhor Aayee Gaya Andhiyara (Bawarchi, 1972), Ye Sham Mastani (Kati Patang, 1970) and more. Check them out:

Song of Muqaddar 1950 Audio only


then introduced by him to the world of Hindi film music.
Posted by /bolywoodfiles.blogspot.com at 09:43:00