The First Ten Films Made Shankar Jaikishan, the Household Name 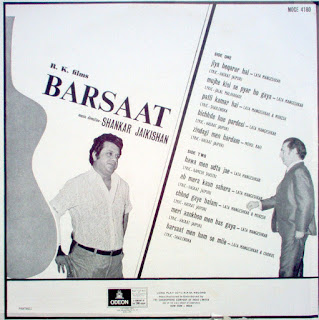 "Barsaat" was the first film of Shanker Jaikishan and "Patita" was the 10th film from 1949 to 1953. That was the period when Naushad and C Ramchandra were leading Bollywood Music. S D Burman was also emerging.
Shankar-Jaikishan's compositions broke new ground in Hindi film music. Apart from relying upon their knowledge of Indian classical music, they also employed western beats and orchestration.  They made use of the orchestra and musical instruments (often dozens or hundreds of them) in their songs.
Song of Barsaat 1949
The music of Barsaat brought freshness in film music, its songs, and background music created new records in the Film industry. Barsat had 12 songs, all the songs were hit. The songs like "Jiya Beqarar Hai", "Hawa Mein Udta Jaye", "Barsaat Mein Humse Mile", " Meri Aankhon Mein Bas Gaya Koi Re" Chhod Gaye Balam",  and " Patli Kamar Hai" became a rage. Each song was new and had vitality beyond the imagination of the music lovers. With this film, Shankar Jaikishan walked into the hearts of the masses.
Song of Baadal 1951
Baadal*(1951) was the second film of Shankar Jaikishan, Premnath and Madhubala were the lead pair. The film had 8 songs, almost all songs were popular."Aaj Maane, Aaj Maane Na Moraa Jiya ThumakThumak Naache Sawan Ka Mausam Suhana", "Main Raahi Bhatakne Wala Hoon", and "Aye Dil Na Mujhse Chhupa Sach Bataa Kyaa Hua" were very hit.
Song of Aawara 1951
In December 1951, the third film of Shankar Jaikishan," Awara" released' the film was a hit, even more, hit was its soundtrack. The soundtrack was listed by Planet Bollywood as number 3 on their list of 100 Greatest Bollywood Soundtracks. The film has 10 songs and all the songs were hit. Awara Hoon immediately struck "a chord in audiences from various classes and backgrounds all over India and beyond: in China, in the Soviet Union, in the Middle East. The popularity of "Awaara Hoon" led to the creation of localized versions of the song in Greece, Turkey, the Middle East, the Soviet Union, China, and Romania. Awara has songs of all moods. Hum Tujhse Mohabbat Kar Ke", and Aajao Tadapte Hain Arman of helplessness. Ek Bewafa Se Pyar Kiya" a melody by a heroine accepting her mistake and E Do Teen Aaja Mausam Hai Rangeen a joyful song is still in the heart of music lovers.
Song of Kaali Ghata 1951
Kaali Ghata (1951) was the fourth film of Shankar Jaikishan. starring Kishor Sahu and Bina Rai. The title song O Kali Ghata Ghir Aayi Re, O Bajne Lagi Shehnaai Re, Hamse Na Poocho Koi Pyar Kya Hai, became popular. "Ille belle aa re" became so popular due to its catchy tune.
Song of Poonam 1952
Poonam came after Kaali Ghata in 1952. The film had 8 songs, all except one song are solo of Lata Mangeshkar. The first song of the film "O bhole balma o more sajna, ghunghar baaje chhun chhun , Aayi Aayi Raat Suhani, and "Din Suhane Mausam" became successful
Song of Daag 1952.
In 1952 Shankar Jaikishan had 4 releases. Poonam, Parbat,Nagina and Daag. The music of all these films was super hit. The song of Daag " Ae Mere Dil Kahin Aur Chal" had 3 versions one fast and sad by Talat Mehmood. This song was as hit as "Awara Hoon" With this song Shankar Jaikishan, introduced a new trend. An exuberant song transformed into melancholy. This was the first experiment in Hindi Film music having the same lyrics but different versions.
Song of Parbat 1952
Parbat was another film of Shankar Jaikishan, it had 7 songs, all the songs were popular."Haye Mera Dil Le Gaya Koi Aake Ishaaron Se", and "Kya Bataoon Mohabbat Hai Kya," were romantic songs, appreciated by the masses. The other popular song " Beraham Maar Daale Na Mujhko Tera Gham, Ab To Aa Ja" sung by Lata with the chorus. This song has few words but the interludes and the voice of the chorus win the heart of listeners.I think this song laid the foundation of the future chorus songs of Shankar Jaikishan.
Song of Aah 1953
Aah was the 9th film of Shankar Jaikishan, released after Parbat in 1953. It was an RK Film but directed by Raja Nawathe.. The film was rated "Below Average" at the box office but has various hit songs like "Raja Ki Aayegi Baaraat", "Aaja Re Ab Mera Dil Pukara" and "Jaane Na Nazar". The song "Chhoti Si Yeh Zindagani" sung by Mukesh was also picturized on him.
Song of Patita 1953
Patita produced and directed by Amiya Chakrabarty. The film stars Dev Anand, Usha Kiran, Agha was the 10th film of Shankar Jaikishan, by this time this duo was riding high on popularity, with this film they emerged the leading music director. Patita is especially well known for some very melodious and popular songs that include: "Andhe Jahaan Ke" by Talat Mahmood, "Hain Sab Se Madhur Woh Geet Jinhein Hum Dard Ke Sur Mein Gaate Hain" by Talat Mahmood, "Kisi Ne Apna Bana Ke" by Lata Mangeshkar, "Mitti se Khelte Ho" by Lata Mangeshkar and the duet "Yaad Kiya Dil Ne Kahaan Ho Tum" by Hemant Kumar and Lata Mangeshkar.