Raj Kumar- A Towering Personality of the Golden Era 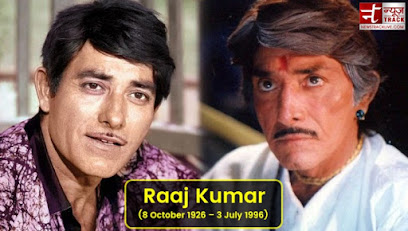 Raaj Kumar stood out for his unique manner of acting and dialogue delivery His screen presence was such that whenever he appeared with any hero, he will overshadow the person present in the frame. Most of the established heroes of that era avoided working with him.

He achieved prominence with his brief role as the husband of Nargis in Mother India.in 1957, He was paired with Dilip Kumar in Paigham(1959), he played Dilip Kumar's elder brother who is a mill worker and loyal to the owner of the mill. In a small role, he overshadowed Dilip Kumar who was an established actor at that time. He was nominated for Best Supporting Actor for that film.

He was cast with Rajendra Kumar in Dil Ek Mandir(1963), Raaj Kumar played the role of a cancer patient for which he won the Filmfare Award in the Best supporting actor category. He appeared in Godaan in the same year, gave a memorable performance.