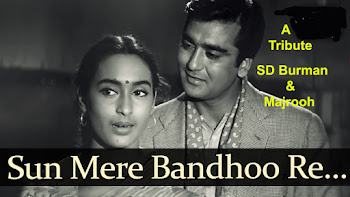 This immortal song from Sujata(1959) was written by Majrooh Sultanpuri and composed and sung by the great S D Burman. Both born on 1st Oct. This song was a background song.

The director of the film Bimal Roy gave a rough outline to Sachin Da for a song situation to be sung by a commoner. He wanted a song to sound as if it was straying off-tune, in spite of being in tune. Many singers were tried but ultimately Sachin Da himself finally recorded in his own voice. This was his second song in Hindi films sung after a gap of 12 years.

Majrooh Sultanpuri wrote beautiful lyrics for this situation. The Hero and Heroine are in love They are on a riverfront and a boatman singing in the background expressing their love for each other. Their emotions are caressed by the gentle breeze. The unclear, dispersed light of late evening gives this 'Bhatiyali' song a perfect background. The excellent picturization. Their lips seem to be moving but the sound is mooted, the lyrics in the background expressing their feelings.

Surprisingly the scenes were shot well before the song was ready, in fact, the lyrics were written at the time the scene was being shot. Song recording was done after a few days. It was S D Burman singing solo after 12 years,

Song of Sujata 1959
This song was used in many films after Sujata. In the 1963 film Bandini , the first two lines were hummed by SD Burman himself. In the 1973 film Abhiman, a few lines were used in the background in a scene
A Scene from Abhiman 1973
It was again used in the background by Gulzar in his film Achanak(1973), one line in a female voice of Lily Chakravarti along with Dada's voice
A Scene from Achanak 1973
In the 1974 film Dil Diwana the opening lines of this song were sung by Asha Bhosle in the song ' Mein Ladki Tu Ladka' composed by RD Burman

In the 1983 film Pukar, R D Burman gave his tribute to this tune in his own voice by changing the lyric as Sun Mere Lamboo Re in a song sung by Amitabh Bachchan 'Tu Maike Mat Jaiyo'
Song of Pukar 1983