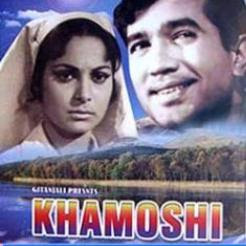 Today is Florence Nightingale's birthday. Every year on May 12th we celebrate her legacy with Nurse Day,  The medical profession is by far among the noblest ones, so Bollywood made several fictional as well as non-fictional movies based on the medical profession. In this blog, I have selected 15 such films starting from Dr. Kotnis Ki Amar Kahani(1946) to Kabir Singh (2019)

As per my research, the first film on this profession was in the silent era  The film was Imperial Film Company's Nurse. also called "Daya ki Devi,” (1927), directed by Mohan Dayaram Bhavnani. Sulochna (Ruby Myers) played the role of a nurse.

Dr. Kotnis Ki Amar Kahani  It was a 1946  film in Hindi as well as English, written by Khwaja Ahmad Abbas and directed by V. Shantaram, he played the title role in both versions. The film was based on the life of Dwarkanath Kotnis, an Indian doctor who worked in China during the Japanese invasion in World War II. 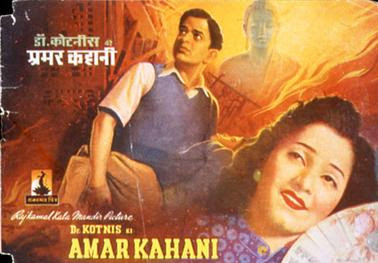 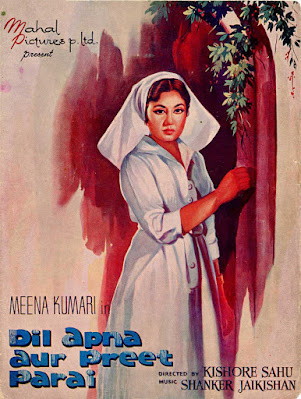 Anuradha (1960) , It is a Hrishikesh Mukharjee's film based on a short story written by Sachin Bhowmick. It’s a love triangle between a young woman, who marries an idealistic doctor but later develops feelings for a rich friend. Dr Nirmal Chowdhary (Balraj Sahni), who loses his mother to illness decides to dedicate his life to serving the poor and moves to remote Nandgaon. A rich heiress, Anuradha (Leela Naidu), is smitten by him and wants to marry him, despite him warning her of the hardships she’d face in a remote village. 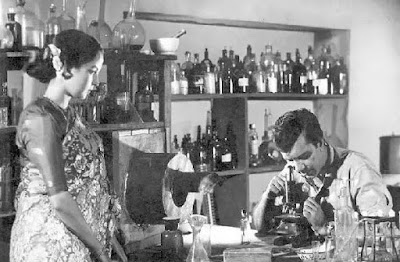 Prem Patra  is a 1962 film directed by Bimal Roy. It stars Shashi Kapoor and Sadhana . Shashi Kapoor plays an MBBS student who had misunderstanding over a love letter with Kavita Kapoor (Sadhana), His marriage got fixed with another girl called Saroj. In an accident Shashi Kapoor loses his vision , Saroj is unable to go to take care of him, and Kavita takes her place. Unwilling to reveal her identity, Kavita let's him think it is Saroj, not her. She learns that he still hates and despises her. Soon it will be time to take bandages off his eyes, and he will be able to see again, much to the dread of Kavita. 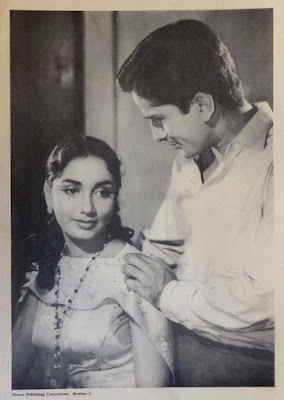 Aarti is a 1962 Indian Bollywood film directed by Phani Majumdar and produced by Tarachand Barjatya. The film stars Meena Kumari in the title role of Aarti, with Ashok Kumar, Pradeep Kumar who plays Deepak saves Aarti Gupta (Meena Kumari), a hardworking and dedicated doctor, from drowning, and the two eventually fall in love with each other, although her parent have already engaged her to marry Dr. Prakash (Ashok Kumar). Although Aarti's father firmly disapproves of this relationship, Deepak and Aarti marry. Once  Deepak having a serious accident, when Prakash is the only surgeon who can operate on him. He agrees to operate on him only if Aarti promises to come back to him and forget her husband. 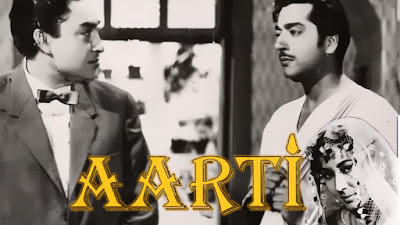 Dil Ek Mandir is a 1963 film directed by C. V. Sridhar. The film stars Rajendra Kumar, Meena Kumari, Raaj Kumar and Mehmood.Sita (Meena Kumari) is married to Ram (Raaj Kumar), who is diagnosed to have cancer. Ram is admitted to a hospital where he is to be treated by Dr. Dharmesh (Rajendra Kumar). Dr. Dharmesh is Sita's former love and both of them are very much uncomfortable interacting in front of Sita's husband. Sita suspects that Dr. Dharmesh will not be able to give her husband fair treatment because of his love interest in her. When she mentions this to him he promises her that he will try his best to save her husband. Ram overhears this conversation and later suggests to Sita that she should marry Dr. Dharmesh after his death. 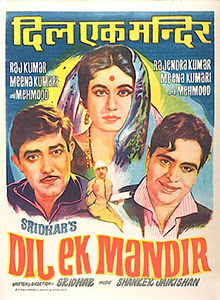 Khamoshi is a 1970 film starring Rajesh Khanna and Waheeda Rehman.The film is considered to be Waheeda Rehman's finest acting feat, as she carries the entire film through her powerful-yet-understated acting; her performance earned her a Best Actress nomination She played a nurse in this film. 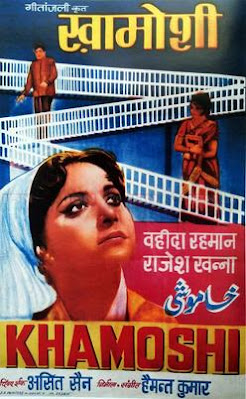 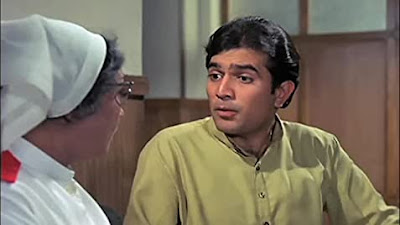 Tere Mere Sapne is a 1971 film produced by Dev Anand, and written and directed by his brother Vijay Anand for Navketan Films. Dev Anand and Vijay Anand both played the role of a doctor. Dr. Anand Kumar attains his degree in medicine and re-locates to a small village to assist the local doctors there. Upon arrival, he is met by the ailing Dr. Prasad and his wife, and hired on a salary of Rs.250/- per month. He meets with the other doctors namely Dr. Kothari, an alcoholic, and Dr. Bhutani, a dentist. 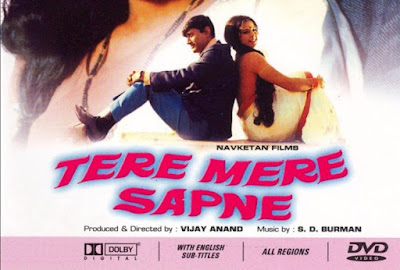 Dard Ka Rishta is a 1982 Bollywood film produced and directed by Sunil Dutt, who also stars Smita Patil, Reena Roy and Ashok Kumar play pivotal roles.Ravi Kant (Sunil Dutt) is a doctor who lives in New York with his wife Anuradha (Smita Patil), also a doctor. Anuradha is doing research into leukemia. Ravi is nostalgic about India and decides to return there when he receives an offer for a position as the head of surgery from Tata Memorial Hospital in Bombay. Anuradha wants to continue her research and does not want to go to India. Ravi returns to India after a divorce with Anuradha. 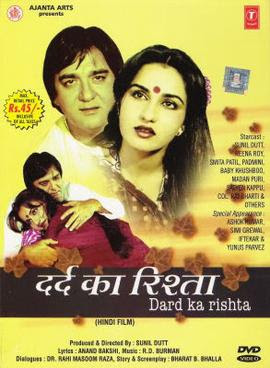 Bemisal  is a 1982 drama film produced by Debesh Gosh and directed by Hrishikesh Mukherjee The film stars Amitabh Bachchan, Vinod Mehra, Raakhee, Amitabh (Sudhir) and Vinod Mehra(Prashant) both played a doctor in this film and are brothers.  Vinod Mehra ( Prashant) leaves for America for higher studies, while Sudhir stays in Bombay to take care of the magistrate and Kavita. After coming back, Prashant starts a medical practice and charges more money from patients, especially to do illegal abortions. Sudhir tries to reason with him, but he wouldn't listen. One day, Prashant's patient dies during an abortion and he gets arrested. Sudhir tells police that he was the actual culprit and changes all hospital records to prove that. In return, he takes the word of Prashant and Kavita to use the medical profession to serve people, not to earn money. They give him their word and do exactly the same. Sudhir gets a nine-year sentence and loses his medical registration. 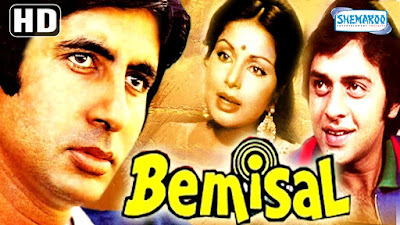 Armaan is a 2003 film that was co-written and directed by Honey Irani. Starring Amitabh Bachchan, Anil Kapoor, Preity Zinta, and Gracy Singh. Siddharth(Amitabh) and his son, Akash,(Anil Kapoor) work as doctors in the same hospital founded by the former. Siddharth wishes to run a state of the art hospital but his work and profession means he dedicates his time to his patients. Soon, a new doctor, named Neha, join the hospital and subsequently falls for Akash. However, the arrival of Sonia later changes the two's relationship. Sonia is a jealous, spoilt woman who is used to having things her own way and it is not long before she wants Akash for herself. She decides that since Akash is the man for her, she can latch on to him by literally getting his love through financial agreement. The agreement states that on marrying Sonia, her father Gulshan will help finance the hospital project. 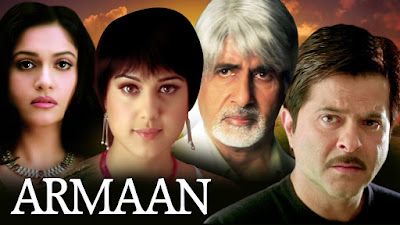 Munna Bhai M.B.B.S. is a 2003 film directed by Rajkumar Hirani in his directorial debut and produced by Vidhu Vinod Chopra., The film stars Sanjay Dutt as the titular character and Gracy Singh in the primary lead roles.  Murli Prasad Sharma (Sanjay Dutt), a goon nicknamed Munna Bhai, who stays with his friend and sidekick Sarkeshwar a.k.a. Circuit (Warsi), and pretends to be a doctor upon the arrival of his parents whose wish of seeing their son as a doctor is shattered after one of the father, Hari Prasad Sharma's (Sunil Dutt) old family friends, Jagdish Chandra Asthana (Irani), busts the truth regarding Munna's profession and practice, causing them to leave in shame and disgust. Vowing revenge against Asthana and his daughter "Chinki" who was his childhood friend, Munna unwittingly secures admission in a medical college whose dean, surprisingly, turns out to be Asthana himself. However, he ends up falling in love with a house doctor, Suman (Singh), unaware that she is "Chinki" herself, and brings about a climate of empathy amongst students and patients, which Asthana perceives as chaotic, thus creating a lot of hilarious situations and frictions between them. 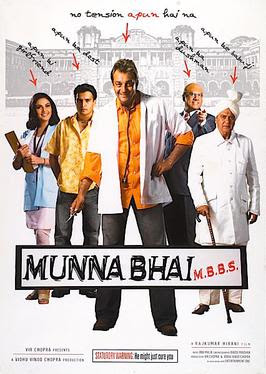 Udta Punjab is a 2016 film starring  Shahid Kapoor, Alia Bhatt, Kareena Kapoor and Diljit Dosanjh. The film is not outright a medical-based film but  loosely based on and revolves around the drug abuse by the youth population in the Indian state of Punjab Kareena Kapoor plays Preet Sahni (Kareena Kapoor), a doctor and activist who runs a rehabilitation center. Sartaj Singh (Diljit Dosanjh) is a junior policeman who knows about the drug smuggling his seniors are allowing. But when it affects his family, as his brother, Balli, overdoses and is brought to Preet's clinic, he realizes the grave situation. Preet and Sartaj decide to find the root cause of the problem together. Balli is admitted into her drug rehabilitation centre against his will. 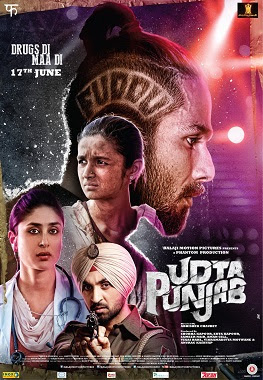 Kabir Singh is a 2019 . it stars Shahid Kapoor in the titular role as a surgeon who spirals into self-destruction when his girlfriend, Preeti, played by Kiara Advani, marries someone else.
Kabir Rajdheer Singh is a house surgeon at the Delhi Institute of Medical Sciences. Despite being a brilliant student and surgeon, he has severe anger management problems that earn the wrath of the college dean.. Kabir graduates with an MBBS degree and leaves for Mussoorie to pursue a postgraduate degree in orthopaedic surgery. Kabir and Preeti's relationship strengthens over the next few years, despite the long distance. After Preeti graduates, Kabir visits her home to meet her conservative Sikh parents, but her father Harpal catches them kissing and throws Kabir out. 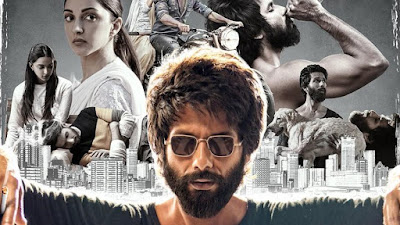