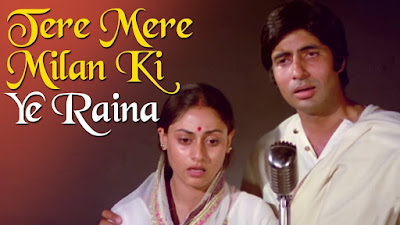 This Classic song from the 1973 film Abhiman was written by Majrooh Sultanpuri and composed by S D Burman was influenced by the song 'Jodi Tare Nai Chini Go Sheki 'of Rabindra Tagore. Over the years, the original Song Jodi Tare Nai Chini Go Sheki has been performed by various artists – Kishore Kumar, Shaan, Anwesha, Shrabani Sen, Shreya Ghoshal, Hemant Kumar, and many more. While I was researching for this song, I found a very rare version sung by the great K L (Kundan Lal) Saigal.

This song appears when the movie reaches its climax when the couple Subir (Amitabh) and Uma (Jaya -Bhaduri) get separated, Uma has a miscarriage, and finally they, fortunately, reunite – what an emotional reunion celebrated with this beauty of a song “Tere Mere Milan Ki Yeh Raina” rendered in public by both.

Though this song was influenced by Rabindra Tagore, S D Burman gave his magical touch to the original tune made this song immortal. We must also appreciate Mazrooh Sultanpuri to give lyrics for the wonderful tune. He was awarded the Filmfare Award as Best Lyricist. S D Burman was awarded the Best Music Director.

If you listen to all the versions of 'Jodi Tare Nai' you will find how beautifully the Abhiman song was composed. The song starts with a hmmm. by Kishore Kumar, a divine hmmm unmatchable. The song is a duet of Kishore and Lata Mangeshkar, one of the immortal duets of both.

This tune was again used in the 1985 film Jhoothi's song set in Rupak Taal (that's the name for the beats on the Tabla). Bappi Lahiri has set his Chanda Dekhe Chanda from Jhoothi.