The Story Behind the Song 'Zindagi Kaisi Hai Paheli' 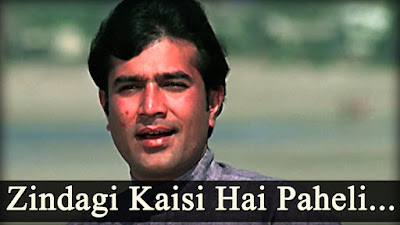 This beautiful song from Anand was sung by Manna De, composed by Salil Da, and written by Yogesh is now 50 years old. This song was included in the film to compensate Yogesh, the lyricist for a song he wrote earlier for this film but not recorded. The Director Hrishikesh Mukharjee thought of obliging Yogesh to write a Title song.

It being the title song so Salil Da recorded this song in the voice of Manna Dey. When Rajesh Khanna, the hero of the film heard the recorded version of this song, he said that such a lovely composition should not be wasted on the title. He insisted the song be shot on him. It became the first solo song of Manna Dey for Rajesh Khanna. Interestingly all the other songs in this film were sung by Mukesh for Rajesh Khanna.

The song was shot in three hours and only two antaras were kept in the film. As per Yogesh, he wrote 5 antaras, and three antara were recorded but only two were shot. Manna De used to sing the third antara on many stage shows in those days.

According to Bimal Roy's daughter Rinki Bhattacharya, this melody was originally written for a film Anand Mahal which was delayed so Sali Da used this melody here in this movie. Salil Da in an interview once said that arrangement is not a part of Indian music. It is a western concept but he felt it is also essential for a film song else there would be nothing to hold the edifice. For my compositions, I normally use an Indian melody and flavor it with something western.

In this song too Salil created a unique concoction of eastern and East Europian melody.