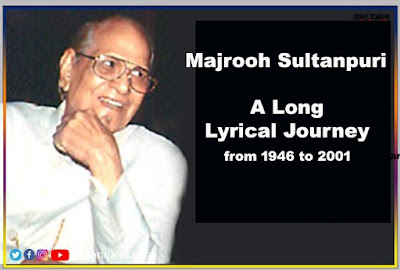 His first film as a lyricist was Shahjehab(1946) writing the immortal song 'Jab Dil Hi Toot Gaya' sung by K L Saigal and the last filmOne 2 Ka 4 (2001). He was the only lyricist who wrote songs for heroes ranging from Saigal to Shahrukh Khan and leading ladies from Nargis to Madhuri Dixit.

He worked with all the top music directors of his time –  Naushad, Anil Biswas, Madan Mohan, OP Nayyar, Roshan, Laxmikant Pyarelal, his associations with SD Burman and later were with RD Burman stand out. In fact, he introduced R D Burman to Nasir Hussain for Teesri Manzil. In his last film, he wrote for A R Rehman.

He was part of the formidable quartet of lyricists that ruled Hindi Cinema in the 1950s and early 60s, the others being Sahir Ludhianvi, Shakeel Badayuni and Shailendra. Majrooh Saab’s career, spanning over five decades, saw him writing wonderful lyrics for well over 300 films, many of them extremely successful at the box office.

He could write any kind of lyrics tailor-made for the situation in the film. Be it the peppy “Hum hain rahi pyar ke” (Nau Doh Gyarah) or the nonsense lyrics of “C-A-T cat, cat maane billi” (Dilli Ka Thug) to “Aaj main upar aasman neeche” (Khamoshi – The Musical), Majrooh became the undisputed king of the “situational song. He got his first break as a lyricist in A R Kardar’s Shah Jahan in 1945, penning the last classic by K L Saigal “Jab dil hi toot gaya”.