The Evolution of Mothers in Bollywood 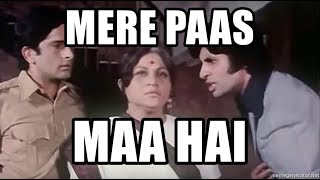 'Mere Paas Maa Hai'- Recall this very popular dialogue of Shashi Kapoor from the 70s film 'Deewar' embodies the significant meaning of a mother’s existence in one’s life. If we look into the Bollywood films the portrayal of a mother has always been changing in every decade.

The God-fearing, homely moms of the 40s,  an idealistic mother, who tolerated misery. in the 50s and 60s, mothers laboring over a sewing machine in the 70s and 80s, friendly, witty, and modern in thinking of the 90s to the mother of films like English Vinglish, Mom, Secret Superstar, Vicky Donor.

In this blog, I look into the mothers of the 21st-century being portrayed in Bollywood films. The first significant role of a mother in my list is the role that shattered the stereotyped Maa role was in 'Kya Kehna' (2000). In this film, Preity Zinta plays a young unwed mother who takes on society to protect her unborn child.

Another unconventional mother role was that of Kirron Kher in 2008’s Dostana, who although with a heavy heart, was ready to accept her son’s boyfriend. Ratna Pathak Shah plays the new-age mother  is the best friend in films like Jaane Tu…Ya Jaane Na

How can we forget Sridevi who played a role of a mother, who enrolls in an English-speaking course to stop her husband and daughter from mocking her lack of English skills[ and gains self-respect in the process in the 2012 film English Vinglish and also a mother who takes revenge of the rapists of her daughter in the 2017 film 'Mom'

We will see more unconventional mothers in Bollywood films in the future. The challenge, however, is to present the new-age mom without eliminating the core attributes that define motherhood.