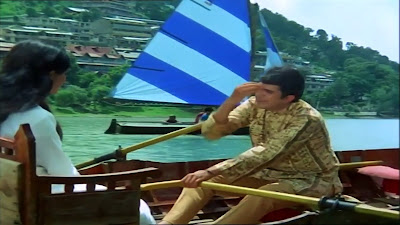 Nainital, the most favorite hill station of the North Indians has been a favorite location for Bollywood Filmmakers. The first Bollywood film shot in Nainital and nearby places was Madhumati released in 1958. But before that Guru Dutt and Zohra Sehgal, who were disciples of Uday Shankar, established the 'Uday Shankar India Cultural Centre', at Simtola, near Nainital.

Song of Gumrah 1963
The next song is from the 1964 film Shagun starring Waheeda Rehman and Kamaljeet. The film was shot at Mehboob Studios in Bombay and Nainital.This song was shot in Nainital
Song of Shagun 1964
Song of Waqt 1965
Song of Bheegi Raat 1965
Song of Anita 1967
Song of EK KALI MUSKAYEE 1968
This song made Nainital more popular among tourists
Song of Kati Patang 1971
Song of Masoom 1983