Naushad- The Man Who Introduced Raaga Based Songs in Hindi Movies. 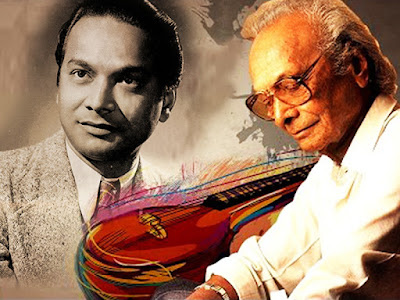 Naushad started as an independent music director from the 1940 film Prem Nagar. He made Hindi songs popular by mixing UP and Bihar folk music with Indian classical music.He first got noticed with A.R. Kardar's film Sharda (1942) wherein 13-year-old Suraiya debuted with the song "Panchhi Ja" for the playback for heroine Mehtab. It was Rattan (1944) that took Naushad right to the top

It was in 1946 he got superstar status with the two immortal songs from the film Anmol Ghadi.. In the same year, K L Saigal gave one of his immortal songs "Jab Dil Hi Toot Gaya" under his composition in Shahjehan (1946) in Raag Bhairavi. His favorite ragas were raga Pahadi, Aiman, Darbari, Kafi or Des along with Raga Bhairavi. He also composed songs in unconventional and difficult ragas such as Jaijaiwanti, Kedara, Brindabani Sarang, Bihag, Durga, Kirwani and Kalavati.

In this blog, we take a journey of his raga-based songs in Bollywood.

In the 1944 film Rattan, he composed 10 songs and the music by Naushad was such a phenomenal hit that the company earned Rs 3 lakhs in royalties from Gramophone sales in the first year. You would be surprised to note that the producer Kardar spent 75,000 rupees on the production of this film.

The Song based on Raga Pahadi

His most durable composition Suhani raat dhal chuki was shaped in Pahadi and was from film Dulari made in 1949 that became legendary and is still considered an integral part of any singer’s repertoire in any musical gathering.

Song of Dulari 1949
Raga Pahadi
Song of Andaz 1949
Raga Jaijalvanti
Song of Andaz 1949
Raga Bhimpalasi
Song of  Babul 1950
His classical genius was the 1952 film Baiju Bawra in which he used the voices if the great Ustad Amir Khan and D V Palusjar. The climactic contest between Tansen and Baiju Bawra in the royal court of Mughal emperor Akbar demanded music of the highest finesse to exemplify the capabilities of these historical legends. Naushad introduced classical music with deft handling, making it melodious for mass appeal and yet retaining enough artistry as the situation demanded. There could not have been a better composer than Naushad Ali to make this film an unforgettable feature of Indian cinema. The music in “Baiju Bawra” is divine! It is, in fact, the soul of the film.There are many moments in “Baiju Bawra” when the contribution of Naushad emerges the strongest point of the movie. Mohammad Rafi, lyricist Shakeel Badayuni and Naushad leave you in a trance with the all-time great number “Man tarpat hari darshan ko aaj”. Rafi had reportedly confessed to this being one of the toughest songs of his career as a demanding Naushad sought perfection from the legendary singer.
Raga Bharavi
Song of  “Baiju Bawra”  1952
Raga Darbari
Song of  “Baiju Bawra”  1952
Raga Malkauns
Song of  “Baiju Bawra”  1952
Raga Gara
Song of Mughal-e-Azam in 1960
Raga Darbari Kanada
Song of Mere Mehboob 1963
Raga Kalavati
Song of Dil Diya Dard Liya in 1966