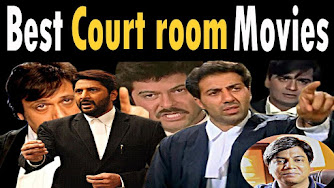 Courtroom scenes were once a favorite genre during the Golden Era of Bollywood. Of late this is completely missing in our films, barring one or two exceptions like Jolly LLB or Pink.
The reason I think for creating a courtroom scene, a solid script is required, a lot of groundwork, understanding of law and procedures of a court, and finally a perfect direction.
In the 1950s and 1960s, the court scenes usually come at the fag end of the film. Most of these scenes foretold by a quick shot of the national slogan "Satyamev Jayate" or by the shot of Goddess of Justice wearing a black colored bandage on the eyes and carrying a pair of weighing scale on the hand and almost invariably, the truth did prevail.

Each decade presented a peculiar legal drama, in the late 40e patriotic court cases were common, recall the court scene of Shaheed (!949), where Dilip Kumar is being prosecuted. In another film Amar (1954).Dilip Kumar plays the role of an advocate. There was a court scene where Dilip Kumar fights a case for Madhubala.

Dev Anand films had many courtroom scenes. every fourth film of his had a court scene, either he is a lawyer or a convict. In Paying Guest he plays the role of an advocate. Similarly in 1962 film Baat Ek Raat Ki, he once again played a lawyer. In Kala Bazar there was a famous court scene in which Chetan Anand appeared. as a lawyer. In the 1968 film Dev Anand once again played the role of an advocate.

In the 1951 film Awaea, in a very famous court scene, Nargis appeared as an advocate for the convict Raj Kapoor. This was perhaps one of the earliest instances of a female lawyer being shown in our cinema. The film starts with the courtroom scene where Nargis walks in to announce that she is going to defend Raj Kapoor in this case much against the wishes of Prithviraj Kapoor the father-like figure who had brought her up. 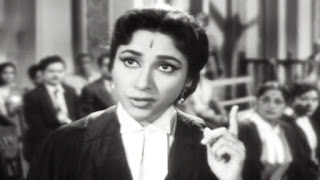 Mala Sinha also appeared as a lawyer in Pooja Ke Phool (1964). Dharmendra, the hero is charged with the murder of an unknown young woman.  Mala Sinha who plays a defense lawyer and her father Ashok Kumar who plays public prosecutor is one of the highlights of the film. There were interesting and dramatic courtroom scenes and the confrontation between Mala Sinha and Ashok Kumar. The last 45 minutes were devoted to this courtroom scene.

Courtroom Scene Mamta 1966
Suchitra Sen also played as an advocate in the 1966 film Mamta. Suchitra Sen in memorable double role-playing both mother and daughter. The daughter is brought up by Ashok Kumar without letting her know the identity of her mother.  The last scene of the film which is both emotional and impactful has the daughter Suchitra Sen as the defense lawyer pleading her mother’s case and she comes up with a splendid performance that leaves the audience stunned.


Courtroom Scene Kanoon 1960
Kanoon (1960) was an outright courtroom drama film. .A story of a murder mystery, starting with the Judge having Bet with Fellow judge to commit a murder and get Scot free from Law. It was the first songless film. The film was a courtroom drama of a murder case, where the judge's perspective son-in-law (Rajendra Kumar) is the defense lawyer in a case of murder, for which he suspects his would-be father-in-law.

Courtroom Scene BaaT Ek Raat Ki 1962
Baat Ek Raat Ki is a 1962 Hindi film directed by Shankar Mukherjee, starring Dev Anand, Waheeda Rehman, and Johnny Walker. Dev Anand plays the role of a lawyer. Waheeda Rehman is accused of a murder.. The film starts with a court scene. Renowned lawyer Rajeshwar (Dev Anand) decides to represent her, he accepts her guilt, but as he goes deep into the details of her story and the circumstances, he is not sure whether or not she is guilty. Neela's employer Beni Prasad is the mastermind behind Neela's imprisonment. He is after her property. Rajesh disguises himself and appears at the court on the final day and accuses Beni Prasad and tells the whole story.

Courtroom Scene Yeh Raste Hain Pyar Ke 1963
Yeh Raste Hain Pyar Ke is a 1963 film. The film was based on a real story and famous case of the sixties "Nanavati" case. In the real-life story of crime and passion, Cdr. Nanavati, on his return from an assignment one day in 1959, was outraged to find that the British-born wife he adored had allowed herself to be seduced by his friend of 15 years, Prem Ahuja.
Without a doubt, the courtroom scenes played out by stalwarts Ashok Kumar and Motilal are the highlights of the film. In every scene, one tries to be up on the other and both are an absolute treat to watch. Without these two superb artistes and the riveting courtroom performances, this film would have been hollow. As it is, there are too many empty spaces when Dutt and Naidu are in the same frame.

Courtroom Scene  Waqt 1965
Waqt was a 1965 super hit film, it had very classic court scenes.  Balraj Sahni’s Lala Kedarnath is reunited with his family against the backdrop of a murder trial, and the court scenes serve a clear dramatic function in a story that is already much larger than life. Never in a Hindi film, such drama is shown in a courtroom.
Sunil Dutt plays the defense advocate and acts his heart out, complete with long emotional gazes and melting puppy eyes in a bid to engage the conscience of witnesses. During one cross-questioning, he engages in an entire spectrum of emotions. From screaming at a witness, he moves close and almost whispers to him, urging him to place his hand on the Bhagwad Gita and reverse his earlier statement. Further, in order to prove a point about footprints at the crime scene, he actually drags a sack dripping with red liquid into the courtroom and asks the prosecutor to enact it himself.

Courtroom Scene Mera Saaya 1966
Another iconic courtroom scenes were in 1966 film Mera Saya, directed by Raj Khosla. Sunil Dutt plays an advocate who fights his own case. A lady resembling his wife claims to be his wife. His wife got died on his arms a year back refuses to accept her claim.

Courtroom Scene Mamta 1966
Mamta a 1966 film in which Suchitra Sen had a double role, playing mother and daughter. Ashok Kumar is the judge and the daughter becomes a lawyer. In the last scene of the film which is both emotional and impactful has the daughter Suchitra Sen as the defense lawyer pleading her mother’s case and she comes up with a splendid performance that leaves the audience stunned
.
Court Scene Duniya 1968
Duniya 1968 film is having a memorable courtroom scene. There is a beautiful argument between Dev Anand and Balraj Sahni both are the advocate. The movie deals about three friends Amarnath, Gopal, and his sister, Mala, Years later, all three have grown up. Mala's mom is deceased, while she continues to live with her aunt and uncle, Public Prosecutor Ramnath Sharma; Amarnath is now an Advocate working with Senior Advocate Mehta, and is in love with Mala, not knowing that she is his childhood friend; while Gopal has been to prison in Poona, Madras, and the Police in Hyderabad want him for questioning. Soon Amarnath will be defending Gopal, alias Ram Singh, for the murder of one Mohanchand - and it will be an uphill task for Amarnath - for not only do the Police have airtight evidence against Gopal, Mohanchand

Courtroom Scene  Gambler 1971
Gambler, 1971 film having a long 30 minutes climax court scene. In this film Dev Anand (Raja) plays a gambler who faces a trial in the court for murder. In the climax in Raja's life is in the Court Room where he will find out about his past, and about his parents.

Courtroom Scene Insaf Ka Tarazu 1980
Insaaf ka Tarazu a 1980 film also had memorable court scenes. In the courtroom scene,  Zeenat Aman who has murdered the rapist is the defendant. Pitted against her is Sriram Lagu as Prosecution lawyer. Ifthikhar is the judge. Zeenat Aman says yes she murdered Ramesh Gupta.

Andha Kanoon released in 1983 was a film about law and justice. The film takes a shot at how manipulative could be the law. Jan Nisar Akhtar Khan (Amitabh Bachchan)  is charged with killing Ram Gupta (Amrish Puri), , tried in Court, and sentenced to 20 years in prison. Years later, an angry and embittered Khan is released from prison. Khan finds out that Gupta is still alive and decides to kill him, quite dramatically in the same courtroom where he was convicted for his murder.

Courtroom Scene  Meri Jung 1985
MERI JUNG, a 1985  film with a  subject revolving around lawyers and their questionable practices in the court playing with the hidden truth.  The most electrifying and famous sequence of the film was the one in which Anil Kapoor who plays an advocate shockingly drinks poison from a bottle right within the court in order to prove it hasn’t got any poison at all and his client has just been framed for an undisclosed reason.
Scene of Ek Ruka Hua Faisla (1986)

Ek Ruka Hua Faisla (1986)  features the case against a teenager for killing his father by stabbing. The film not only focuses on the courtroom arguments but also show how jurors debate to reach out for the truth and what goes on in their head and mind when they declare a verdict. This film is an outright law film.


Courtroom Scene  Shehenshah 1987
In the movie SHAHENSHAH starring Amitabh Bachchan where Shahenshah drags JK back to the court and argues his case against JK after JK manages to escape from the news journalist's murder case for lack of evidence.
Court Scene of Damini 1993
Damini 1993 had an unforgettable courtroom scene. Recall  Sunny Deol's famous monologue ‘Tarikh pe Tarikh, Tarikh pe Tarikh’ ! in the courtroom. The heroine named Damini (Meenakshi) fights to get justice, for a rape victim. Sunny Deol appears in the court as her advocate

No One killed Jessica (2011) based on a real case that happened in New Delhi.  Jessica, a young attractive model, a per time bartender, got shot dead at a celebrity party! The film follows the murder case trial and her sister Sabrina’s fight for justice. Rani Mukherjee as Meera Gaity, a news reporter, whereas Vidya Balan plays Jessica’s sister Sabrina.

Court Scene of Pink 2016
Pink 2016 a fantastic film in court proceedings. Amitabh Bachchan played a strong and dominating role as a lawyer who criticizes about the stereotypes about girls and the term and conditions which only applicable (so-called) to girls. Pink is not just a movie, about the attempt to murder case, it questions about the thinking of society and how we judge people and women by looks, actions, and lifestyle. With his every delivery of dialogue, Amitabh takes this Courtroom Drama to its next level of success.