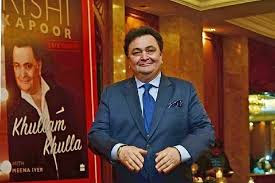 Rishi Kapoor (4 September 1952 – 30 April 2020)  made his debut, as an adolescent, in his father Raj Kapoor's film Mera Naam Joker (1970)for which he won the National Film Award for Best Child Artist. As an adult, his first lead role was opposite Dimple Kapadia in the teen romance Bobby (1973), which won him the Filmfare Award for Best Actor.

The acting was in his blood, he grew up in the cinema atmosphere all around him. He was the grandson of Prithviraj Kapoor, son of the greatest showman of Bollywood Raj Kapoor, and nephew of Shammi and Shashi Kapoor. He wrote in his Biography,"For me, there could have been no film institute better than RK Studio. Film sets were not out of bounds for us, we grew up comfortable in that ambiance. The language, the stories and discussions at home were almost entirely on films.

.I was two years old when I faced a camera.I have no recollection of that acting debut it is captured in the film. I have heard many tales of that day when my father cast him along with my brother and sister in the immortal song 'Pyar Hua Ikrar Hua. from Shree 420. The three of us had to walk through the rain scene.

From very early on, we were also exposed to another side of the film profession. the name, fame, and gossips are part of this life. We were natural to all these. Most of the Kapoors were dropout of schools, acting was their natural profession so he was. When he was in school Mera Naam Joker was offered to him. He played the role of the young Joker. Raj Kapoor fine-tuned his performance by rehearsing every shot of him many times.

Mera Naam Joker was released in 1970, the film flopped but his performance was appreciated. He got the National Award for his performance. His next film Bobby was a super hit He got the best actor award for this film..Between 1973 and 2000 he starred as the romantic lead in 92 films