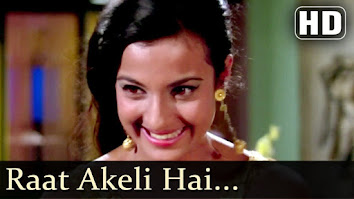 Hamari Yaad Aayegi(1961) was Tanuja's debut heroine-centric film as an adult. The film gave her recognition as a "spontaneous actor". However, the film did not do well at the box-office She appeared in a few insignificant films after that. She was the heroine of Mehmood in the 1965 film 'Bhoot Bangla'.One of her early films noted for her acting was Baharen Phir Bhi Aayengi (1966), It was Guru Dutt, who spotted a hidden talent on her and took her for this film.

It was Jewel Thief (1967),that made her popular with the song 'Raat Akeli Hai' and 'Yeh Dil Na Hota Bechara' opposite Dev Anand. She got many offers of 2nd heroine in films after that. Her next big film was with Jeetendra; Jeene Ki Raah (1969), an immediate and surprise hit. In the same year, Tanuja won the Best Supporting Actress at Filmfare for Paisa Ya Pyar. After the success of Haathi Mere Saathi (1971), she acted in Door Ka Raahi, Mere Jeevan Saathi, Do Chor and Ek Baar Mooskura Do (1972), Kaam Chor, Yaarana, Khuddar, and Masoom. Some of the other films she has acted in are Pavitra Paapi,and Anubhav.

In an interview Tanuha informed that when Dev Anand was starting Hare Rama Hare Krishna, he offered her the role if Jenice to her but I refused because it was a sister’s role. Of course, I regretted it later but I loved watching Zeenat do the role anyway..