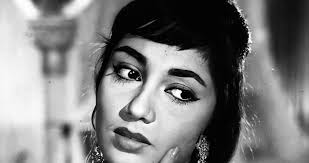 No doubt she was a Style icon of the 60s. Her hairstyle and her dresses were copied by the girls. There was a time when mothers taking their little girls to the hairdresser for a ‘Sadhana cut'. She created a fashion of the fusion churidar-Kurtis and Mojris she wore in Waqt(1965). In an interview, Sadhana told about her famous Sadhana Cut Hairstyle.

She narrated how she got the famous ‘Sadhana fringe’. “I had a broad forehead, which showed prominently in photo tests. It would then be covered with a patch of hair. When we were about to start Love In Simla, the director RK Nayyar said the patch wouldn’t do. Those days Audrey Hepburn’s Roman Holiday (in which she sports a fringe) had just released. So I was promptly rushed off to a Chinese hairdresser and given a fringe.

Regarding her Churidar Kurtas, she told that she wore those conventional Kurtas in the 1963 film Mere Mehboob which were liked by the girls but she now wanted some changes in her wardrobe. She asked Bhanu Athaiya, the Oscar-winning costume designer to create a fusion of the traditional churidar and modern Kurti for my personal wardrobe. One day Yashji (Chopra) happened to come home to discuss my costumes in Waqt when I walked in wearing a sleeveless, gold-embroidered Kurti, churidar, and Mojris and a chic hairstyle, he went, ‘Wow! What you’re wearing is exactly what I want for my film.’ “The style went on to become a craze.”

Abaana (1958) playing the sister's role of the heroine. Very few know that In 1955 she got her first little break. She played a chorus girl in the song "Mud mud ke na dekh... mud mud ke" in Raj Kapoor's Shree 420. She got her first Hindi film Love In Simla released in 1960 but she played a simple girl in her next film Parakh of Bimal Roy. Recall the popular song of this film 'O Sajna Barkha Bahar Aayi'.

In 1961's other hit, Hum Dono released, she played the love interest of Dev Anand.  The song 'Abhi Na Jao Chhod Kar' remains the most romantic song to date. In 1962, she was again paired with Dev Anand in Asli-Naqli by director Hrishikesh Mukherjee. The same year saw director-screenwriter Raj Khosla cast her opposite Joy in Ek Musafir Ek Hasina. Khosla would again work with Sadhana to make a suspense thriller trilogy  Woh Kaun Thi 1964,  Mera Saaya (1966) and Anita (1967) thus making her famous as the "Mystery Girl". Sadhana was the highest-paid actress of her time. During a career spanning over two decades, Sadhana starred in over 30 films.

Sadhana got married to R K Nayyar, the director of her first film in 1966. After marriage, Sadhana worked sporadically and went on to do Ek Phool Do Mali, Intaqam , and Geeta Mera Naam (she even directed it). She quit after Geeta Mera Naam. she was not keeping good health (she was suffering from a thyroid disorder). She was diagnosed with cancer in her old age that led her to her death on 25 December 2015.
Many classic songs were picturized on her, here are a few
Song of Parakh 1960
Song of Hum Dono 1961
Song of Asli Naqli 1962
Song of Mere Mehboob1963
Song of Woh Kaun Thi 1964
Song of Rajkumar 1964
Song of Aarzoo1965
Song of Mera Saya 1966
Song of Inteqam 1969