Hasrat Jaipuri- A Bus Conductor to a Great Lyricist 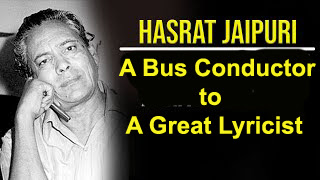 He was born as Iqbal Husain on April 15, 1922.in Jaipur Rajasthan. He got the education of Urdu and Persian from his grandfather Fida Husain. He started writing poems at a young age His mother was not in favor of his Shayari.  He came to Bombay at the age of 18 to earn Bread & Butter, he started working as a bus conductor, earning a monthly salary of eleven rupees. He worked as a conductor for 8 years In an interview, he told that he never asked for a ticket from beautiful girls. Beautiful girls were his inspiration for writing romantic words. His love for writing Urdu poetry remained intact, he used to participate in Mushairas,

in one of such Mushairas, the late Prithviraj Kapoor heard his poetry and recommended him to his son Raj Kapoor who was planning a musical love story with two new composers, Shanker - Jaikishan. Raj Kapoor heard his poems he invited him to write songs for his film Barsaat, his first recorded song was, 'Jiya Beqaraar Hai' for the film. His second song (and first duet) was 'Chhod Gaye Baalam' for the same film. Both songs became popular. In this film, he wrote 7 songs,

Awara (1951) was his second film.he wrote 4 songs in this film, one of the immortal song is 'Hum Tujhse Mohabbat Karke Sanam'. In the same year, his 3rd film Badal got released in the same year. Shankar Jaikishan was the music director of this film also. He wrote 3 songs for this film. In 1951 his 9 films were released, he was now writing songs for other music directors also.

Hasrat Jaipuri wrote lyrics for all Raj Kapoor films till 1971. After the death of Jaikishan and failure of Mera Naam Joker and Kal Aaj Aur Kal, Raj Kapoor turned to other lyricists and music directors.He wrote 1100 + songs in more than 300 films, the last song he wrote was for Saazish with Jatin-Lalit and at the time of his death, he was working on a few small films and a book of Shayari. To his credit, there are more than 2000 recorded songs. He also wrote the screenplay for the movie Hulchul (1951). His last film as a lyricist was Hatya: The Murder (2004He won many awards and mementos for his Songs and Urdu Poetry. He was also awarded a Doctorate from the World University Round Table and Josh Malihabadi Award, from Urdu Conference. He wrote several books of poetry, in Hindi and Urdu. He once said, "Hindi and Urdu are like two great and inseparable sisters. He died on 17th September 1999.